Anne Marie Morrison has regular virtual surgeries with Government ministers and this morning she had a surgery with the Chancellor.

The Prime Minister and Chancellor have an appetite to get up and running as quickly as possible.

Devon is one of eleven areas to be chosen to pilot the test, track and trace which will help things move forward quicker.

ANNE MARIE MORRIS has asked for help for business and one of the problems is for the computer to be able to deal with this.  The Chancellor has come to realise that the computer for links between HMRC, taxation and benefits is quite clunky, and this is something under review.

The indication is that there will be no further money coming out of Government, more has been said about getting things up and running quickly.

Providing that things continue as they are: –

End of July for coffee shops with outside space.

This will leave some challenges as far as the hospitality and tourism sector is concerned.  She had a meeting with seven various tourist boards and there was a big push from the caravan community mainly for private owners to start back early.  Sharing facilities such as shower blocks are stopping camping etc.

The general theme is for areas to all open together, but Government are anxious to get things started so different sectors to open at different times.

One of the things that the Chancellor has recognised is that the WHO have stated that social distancing is set at 1 metre and we have gone high at 2 metres, if this was changed it could make things easier for certain parties.

Sally was a little dismayed at the announcement of the 15th June as the 1st had been suggested and many businesses were gearing up for that.  That said several businesses were relieved as they felt it was too soon.

Sally felt that along with the town opening up, so should the facilities as people would lose confidence if they couldn’t use the facilities (toilets) and there would be no cafes and restaurants open to help with the situation.  Also, security.

Sally had spoken to David Austen who was planning to open on the 9th June but will now hold off until the 15th June.  He needs to know that the whole Town will be open for business so that he can be confident, if he is taking on some expense that he can be sure of compensating business in order to take staff off Furlough.

Anne Marie says that she would contact Teignbridge regarding toilets and security to get some clarity etc.

Sally very concerned about the possibilities of chancellor looking to set up outdoor markets which would then affect town centres when they start to re-open and the Government have left a wide loophole to be exploited.

Helen reported that it was very quiet.  She would suggest that it is either locals or day trippers that are here.

A lot of people have opened up to do take away. One premises has been told to stop selling beer because of the social distancing.

She is hoping for a date of the 4th July which she thinks will be private owners, but what will bring the customers in is the Touring and Camping.  She is finding it frustrating because people are now being asked to pay up the balance of their holidays and they are phoning to see what actually will be available on the site for them and she cannot answer with confidence.

The toilet facilities are open at Dawlish Warren and Teignmouth which she would assume is a high-risk situation and she would like clarity as her shared facilities are not allowed to be open.

Helen has also asked about picknick benches as these cannot currently be used.  Helen feels that these are keeping social distancing and would enable take away food to be served if they could be used.

Starting to prepare the wind back on the Helping Dawlish website.  This website regularly published updates on the businesses that were trading through the lock down.

Initial consultation with Dawlish Chamber of Trade and local Government for guidance on a recovery plan for the Town.  Neil to fill in more information.  A council meeting next Wednesday

Conversation with Richard Gissons regarding the Farmers Market which should have started in April and the reality is that the traders are not prepared so this will not go ahead on the 1st June.

Safety fund which was released at the weekend and almost has to be acted on immediately which makes co-ordination difficult.

Unable to get suitable PPE at reasonable prices to continue with his business.  PPE has become extinct and then very expensive when he does source it.

Wanted to know if there would be additional grant funding or would small business have to seek additional top up income from loans.

She felt quite strongly that there would be no further grants.  If anything, there possibly could be for the hospitality industry because of their recognised difficulties.

Chamber had been asked to conduct a survey on behalf of Town Council regarding the closure of The Strand the results were 11 – yes, 5 – no.

The restaurants and cafes on The Strand were in favour because it means they could push their tables and chairs out further and keep to social distancing, but other cafes away from The Strand were very much against.  It would be something that would be difficult to please everyone.

Talking to retailers he found that a few were surprised not the 1st of June which had been initially suggested, but the majority were now gearing up for the 15th.  Many of the independent businesses were not going to bring staff back from Furlough until they were sure of trade.

We had been organising an open-air market which was due to start in April.  As Angie has already stated this will be difficult to get up and running now and may need to be held off until next year.  However, due to the amount of people using the lawn at present, there would have been concerns about social distancing.

The subject had been raised by a member of Chamber on how everyone had received the same amount of grant money whether they could continue to trade or not and this had been seen as unfair when Hairdressers and cafes could still not open and trade.

The beauty industry are able to sell products online.

Fine selling products online but it’s very different if you are a hairdresser that is predominantly service based.

There could be further grants, if anything at all, possibly the Hospitality Industry.

Neil and Sarah planning to hold a Zoom Chamber of Trade meeting to encourage some enthusiasm in setting up and making businesses Covid safe. 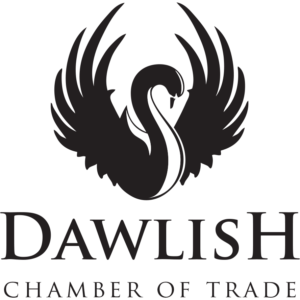